The Nassau County Department of Parks, Recreation and Museums manages more than 30 parks. These include "Active" parks, which are large, offer diverse activities and are heavily used by the public. "Active" parks tend to have full-time, on-site staff. "Passive" parks are much smaller, in many cases consisting of a single athletic field or tiny "green" area. View a listing of some of the larger passive parks.

Located across from Manhasset Bay and along Shore Road on its northern perimeter, 5-acre Barbara Johnson Park and Preserve is a long, narrow and pretty park, the first half of which is dominated by a large, shallow pond framed by native flowers and vegetation. There are numerous benches in this area and a wooden viewing dock on the west side of the pond. 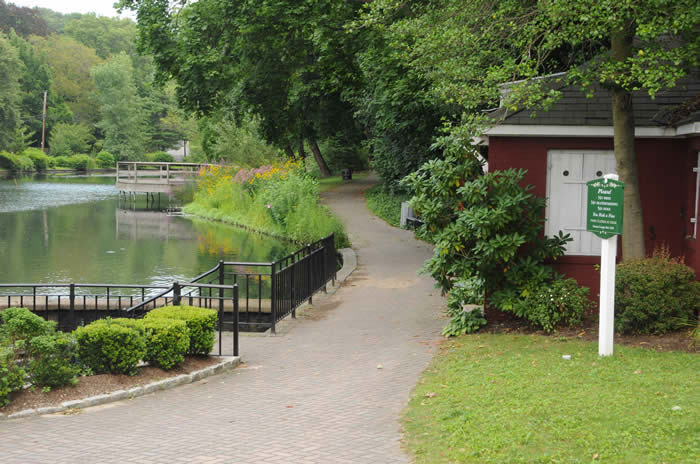 The second half of the park south of the pond is wooded with many maple trees and a stream that feeds into the pond. There is a walking trail on the west side of the pond that is brick alongside the pond and leads into a dirt trail beyond. Barbara Johnson is one of several County properties that were originally designed for drainage purposes and were later turned into public parks. The property was acquired in two parcels, in 1944 and 1975.

This pretty 8-acre park includes a long, winding pond with a small island and a half-mile walkway on the eastern side of the park. Numerous benches alongside the pond provide the opportunity for rest and relaxation. Camman's, acquired by the County in 1961, is one of several County properties that were originally designed for drainage purposes. 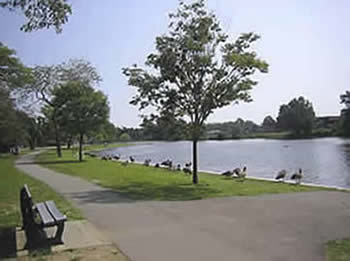 Located across Branch Boulevard from the North Woodmere Park golf course, the primary attraction of this small park is its pretty and large pond, which is fronted by residences. A walking path winds along the western end of the park, and there are more than a dozen benches and a small parking lot. The property was originally acquired by the County in 1963 for drainage purposes.

A 2-acre park set in a residential area, East/West Gate has a creek running through it, together with benches and grassy areas. 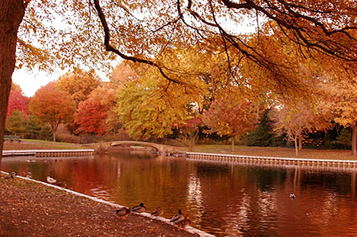 Centrally located in West Hempstead, this 11-acre park includes a 5.5-acre pond with a walkway and a wooded area on its north side. Hall's Pond is a popular local setting for quiet walks and community activities. The park is one of several County properties that were orginally designed for drainage purposes and were later turned into public parks. Hall's Pond is made up of three contiguous parcels of land acquired by the County between 1956 and 1970.

Herricks Pond Park is a centrally located 4-acre park with a small pond and an adjacent parcel of open space. A walking path around the pond and benches provide the opportunity for light exercise and relaxation. Herricks Pond is one of several County properties that were orginally designed for drainage purposes and were later turned into public parks. 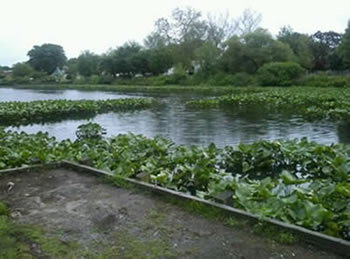 A 14-acre park, Lofts Pond provides a relaxing environment in which to sit or stroll while enjoying a view of the large pond, which is bordered by residences on several sides. The property making up Lofts was acquired by the County in 1963 and 1966.

Lofts Pond was part of a three-pond capital improvement restoration project announced by Nassau County in August 2005. The project, completed in 2007, included cleaning and dredging of the pond; planting of trees (such as grey birch and sweetgum), shrubs (blueberry, elderberry, and pepperbush), aquatic plants (sedges, rushes and ferns) and restoration of walkways. In addition, a gazebo was constructed, as well as a small bridge that provides for viewing the inaccessible shoreline area and for fishing.

The 8-acre Milburn Pond Park provides a pretty setting for a half-mile stroll around the pond or for relaxing on the numerous benches. Across West Merrick Road from Milburn Pond Park, the adjoining Milburn Creek Park is a narrow 24-acre park split by Milburn Creek, which incorporates a mix of salt water from Freeport Bay to the south and fresh water from the north. Milburn Creek Park includes a half-mile walking or jogging trail and a boat launch, accessible via the Atlantic Avenue entrance. 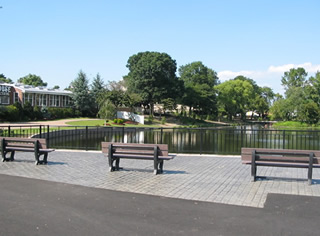 Milburn Pond is one of several County properties that were orginally designed for drainage purposes and were later turned into public parks; Milburn Creek was also the site of the first boat launch offered by the County in 1963. The two properties were acquired by the County between 1956 and 1962.

A 3-acre athletic field, Polaris consists of two baseball fields used by the Levittown Little League as well as local soccer leagues. The property was acquired by the County in 1938 and 1949. 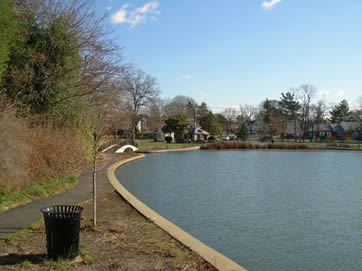 Silver Lake is a beautiful 9-acre park located in a residential area, with a large pond at its southern end. The park's walkway circles the pond, providing a good opportunity for strolling and jogging. The park is also a popular setting for wedding photographs. Silver Lake, acquired by the County in 1946, is one of several County properties that were orginally designed for drainage purposes and were later turned into public parks.

Silver Lake was part of a three-pond capital improvement restoration project announced by Nassau County in August 2005. The project, completed in 2007, included cleaning and dredging of the pond; planting of trees. shrubs and aquatic plants; and restoration of walkways.

A wooded and narrow 3-acre neighborhood park, Stannards Brook Park is bisected by a winding brook with flowering plants alongside. The park includes a trail for strolling as well as several benches and three bridges that span the stream to connect to residential streets on the east side of the park. The park is also part of the New York State Significant Fish and Wildlife Habitat in Manhasset Bay and an important bird sanctuary. Stannards Brook was acquired by the Country in 1944, originally for drainage purposes.

An 11-acre park and preserve, Tanglewood provides a lovely nature trail and a beautifully renovated brick walkway surrounding a pond. The park was originally acquired by the County between 1962 and 1964 for drainage purposes. 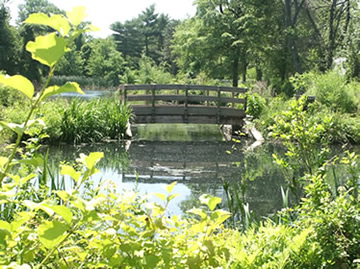 Tanglewood also serves as home for the Center for Science Teaching and Learning, a nonprofit educational organization.

Retired NYPD Bomb Squad Detective and leading champion for Victim Compensation Benefits Fund, Luis G. Alvarez, passed away after a battle with cancer stemming from his assignment at Ground Zero. Just weeks before his passing, Det. Alvarez, a loving husband and father of three sons and Oceanside resident, delivered a moving and crucial plea in Washington before a House Judiciary subcommittee to replenish the September 11th Victim Compensation Fund. This park will serve as a symbol and reminder of his sacrifice and unwavering fight for 9/11 first responders and a tranquil neighborhood space for all to enjoy. 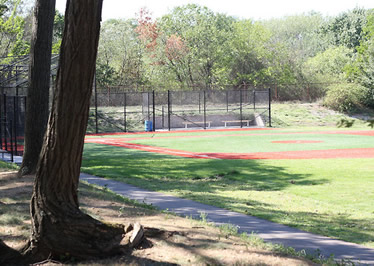 A 4-acre community park, Washington Avenue includes two baseball diamonds in a sunken field. Both of which have bleachers for viewing; a playground area with several attractions for very young children, including swings and small play apparatus. The park also has both benches and picnic tables. The area beyond the playground on the south side of the horizontally shaped park is filled with oak trees. The park was acquired by the County in1941-42 for drainage purposes.

NEWS BRIEF: The New York State Recreation and Parks Society has granted its Outstanding Facility Award to Washington Avenue Park. The park was completely rehabilitated in 2010 after years of neglect. The two baseball fields were redone with artificial turf infields, newly seeded outfields, an irrigation system, new dugouts, new spectator stands and new fencing. Elsewhere in the park, the work included a new playground with separate areas for preschoolers and older children; new pathways and a limited fitness trail; and a new restroom facility. The park, which serves as home for the local Little League, is located at the intersection of Jerusalem Avenue and Washington Avenue.