Old Bethpage Village is open Friday, Saturday and Sunday. Buy Tickets online and save $1 Per Ticket at https://www.oldbethpagevillagerestoration.org/ 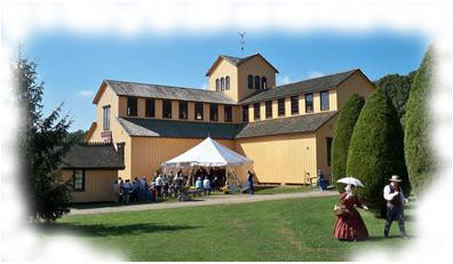 The reconstructed Exhibition Hall today. After 170 years the Long Island Fair continues as the only county fair sanctioned by New York State for the counties of Queens, Nassau and Suffolk.

OLD BETHPAGE VILLAGE RESTORATION provides visitors with a unique and wonderful opportunity to step back in time and experience life in a recreated mid-19th-century American village. The 209-acre Village includes an assortment of homes, farms and businesses.

Each fall, the Village hosts the Long Island Fair, a traditional county agricultural fair that draws tens of thousands of visitors. Most of the year, the Village supports a steady series of family-friendly events and exhibits, including the old-time "base ball" tournaments.

Old Bethpage Village Restoration (OBVR) came into existence in 1963, when Nassau County acquired the Powell property, a 165-acre farm located on the Nassau-Suffolk border. The acquisition of the land and the plan to develop a historic restoration were timely, as rapid post-World War II development on Long Island had taken a toll on the area's landmarks.

Although OBVR never existed as an historic entity, it represents a typical rural Long Island farm village of the mid-19th century — one whose roots can be found in the earlier Dutch and English settlements of Long Island.

During the 1640s, the colonial settlers founded town "spots" throughout the region that functioned as commercial and social centers where taverns, general stores and meeting houses were built. Townsmen received a centrally located town lot as well as outlying fields to use for grazing livestock, growing crops or harvesting firewood.

By 1700, the English had gained control of Long Island, townships controlled whatever land had not already been distributed, and the economy had expanded to include trades dependent on the sea and land. Life remained quiet, unhurried and closely tied to nature — patterns that were evident until well into the 19th century …. and can be experienced at OBVR.

After buildings were moved to the Village, they were carefully restored to a specific point in their history; and the lives of the former occupants were thoroughly researched. Each structure was scrutinized for clues to its role in community life. With the help of wills, deeds and inventory lists, and authentic hardware, shingles and glass, the structures could be authentically furnished (in some cases with pieces original to the building).

In 1963, Plainview’s historic MANETTO HILL METHODIST CHURCH, dating to 1857, was the first structure to be saved and moved to the Powell property. Today, there are 51 historic buildings and seven reconstructions, encompassing 209 acres. Buildings were selected based on their architectural detail and historic significance, with the goal of establishing a representative sampling of historic structures. 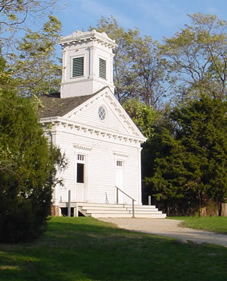 Among the historic buildings is the SCHENCK HOUSE, built around 1730 and one of the oldest Dutch farmhouses remaining in the U.S. The house displays typical massive Dutch framing, particularly on the first floor ceiling joists, which span 32 feet. Other notable features include a side gabled roof with flared eaves, round butt shingles, heavy window sash and a massive stone jambless fireplace.

Another is the BENJAMIN HOUSE, built in 1829 by William F. Benjamin, a Congregational minister, farmer and pastor to the Shinnecock and Poospatuck Native American tribes. (One of Benjamin’s brothers, Simeon, was a prominent merchant and a founder of Elmira College, the first institution of higher learning for women.) The Benjamin House was constructed in the late Federal country style, and its furnishings reflect the lifestyle of this relatively affluent farmer and respected minister.

Visit Old Bethpage Village to see these buildings and others and allow yourself to be transported into an earlier time in the history of Long Island and New York. 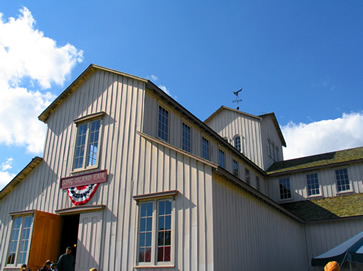 No pets are permitted at the Village, with the exception of certified service animals.