The Reconstruction of West Shore Road

Only authorized personnel and residents will be allowed on West Shore Rd. during construction.

Nassau County has begun meeting with local police and fire departments to ensure emergency response coordination in light of the damaged road. Representatives from the Nassau County Department of Public Works are ensuring that all impacted parties are prepared for any eventuality.

There will be signs saying "No Trespassing, Authorized 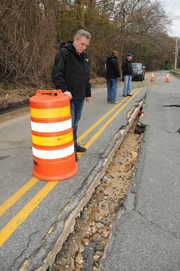 Personnel Only" posted by the contractor. Aside from barricades, patrolling West Shore Road will be under the jurisdiction of the Nassau County Police Department and Old Brookville Police Department.

Phase One, which will begin immediately, will cover a 2,000 linear ft. stretch from Cleft Road towards the Bayville Bridge in Bayville. However, due to the destruction caused to the road, other areas that would have been addressed in the latter phases will be added to the work schedule. In addition, County Executive Mangano ordered that the original time frame for completion, once 18 months, be sped up to nine months. A detour plan has been established in the area.

Federal funds were originally only available during the latter phases, but Nassau County will be seeking some federal relief due to the damage caused by Sandy. Additionally, the County has already set aside some of its own funds in its Capital Plan for the project.

Contact us at (516) 571-9600 or email the County Executive. You can also connect to Nassau County via the Nassau Now app.