CHELSEA MANSION HISTORY: This 40–room mansion, named to the National Register of Historic Places in 1979, was built by Mr. and Mrs. Benjamin Moore in 1924 and is an outstanding example of the design ideas prevalent during the latter part of Long Island's Gold Coast Era. A blend of French, English and Chinese influences, the mansion provides a sense of mood, elegance and charm, while achieving well-proportioned, livable interior spaces. 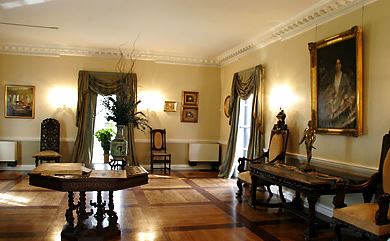 While visiting and cruising the upper Yangtze River in China on their honeymoon in 1921, the Moores were impressed by the appearance of a farm manor with a large terrace and a stark white, black-trimmed facade that was reflected in the adjacent water. Intending to recreate that vision, they purchased the Chelsea property in 1923, got engaged and worked closely with William Delano (of the architectural firm of Delano & Aldrich), to carry out their vision. The building's south side, courtyard, moat and bridges emphasize the Oriental inspiration, while the front elevation, roof and wings show the influence of 17th- and 18th-century French styles.

Chelsea integrates carefully planned landscaping with its design by treating key windows and glass doors as frames for sensitively composed views. This is one of the estate's most distinguished features. Umberto Innocenti served as landscape architect, assisting Mrs. Moore in executing imaginative settings and vistas. Trees, hedges, flowers, ferns and ponds were arranged to develop walking paths. These walking paths provide dramatic contrasts between the mystical and serene. Between open and sheltered sites.

By the 1920s, the era of monumental Gold Coast structures had passed and it was felt that elegance and luxury could be achieved in a less ostentatious setting. The white-washed concrete block residence incorporating Chinese, French Renaissance, English Country House traditions and the fashionable Art-Deco period reflected the thinking of the 1920s and 1930s. Touches of Chinoiserie such as the undulating roof line, a wall inspired by the summer palace in Peking, lotus-filled ponds, a moon gate infuse the essentially French Renaissance (Norman) mansion and English gardens with Oriental grace.

Eclectic interior treatments reflected the prevailing definitions of elegance as well as the owners' desire to express their personal travel and collecting interests. The antique pine paneling in the dining room came from the first Duke of Wellington's country house. Carved teak doors came from the Chinese summer palace; library paneling is Louis XV period, from a château in the Loire Valley. The old oak walls in the first-floor flower room are from a 17th-century English pub. The breakfast room wall covering is 18th-century French hand-painted canvas.

The Sert Gallery is a reception room that features an 85-foot mural painted in oil over white gold. Jose Maria Sert, muralist for King Alfonso XIII of Spain and an internationally known figure of his time, created it for Chelsea in 1926. An 18th-century French fountain details the loggia; Belgian blocks line both fountain and moat. These blocks were collected from the original pavement on West 23rd Street in Manhattan.

Alexandra Emery Moore was a member of a prominent Cincinnati family, and her husband, Benjamin Moore, an attorney, was the great, great grandson of the author Clement Clarke Moore, who wrote the poem "A Visit from St. Nicholas", frequently referred to as "T'was the Night Before Christmas." Chelsea, the name chosen for their Muttontown estate, was named for the area in New York City where Mr. Moore's ancestors had lived for generations. Mr. Moore was also the first mayor of the village of Muttontown (1931-1938), which he named. Mr. Moore's died in 1938, and 17 years later Mrs. Moore married Robert McKay, a life-long friend. He died in 1958. The Moores lived at Chelsea with their three children most of the year and added a children's wing (also designed by Delano & Aldrich) in 1929.

When a change of pace was needed, the family traveled to one of their other homes, either in New York City or Florida. In 1964, Alexandra Moore McKay made her first gift of a portion of the estate grounds to Nassau County. Over a 10-year period, nearly 100 acres were donated to the County. Combining this acreage with previous acquisitions from the Christie Estate created the 550-acre Muttontown Preserve. Alexandra Moore McKay continued to make Chelsea her home until her death in 1983 at the age of 89. 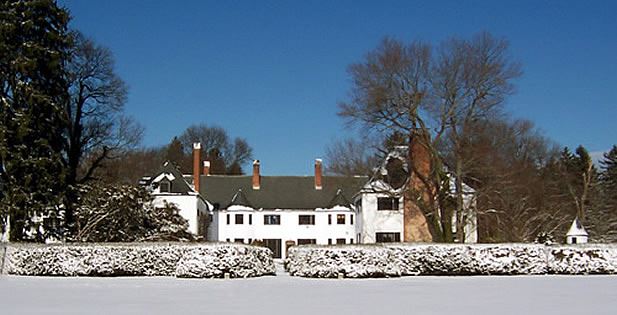 A winter view of Chelsea from the back of the mansion.