All Workshops will be taking place online.

No software download is required. Just click the appropriate link below and choose the option to open the event in your browser. 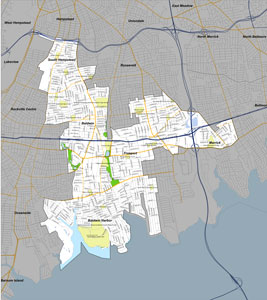 Debra Mulé is currently serving her second term as a Nassau County Legislator. Debra is a longtime Freeport resident and community leader who has taken pride in representing a cross-section of the village's diverse population throughout her public service career. She was elected to the Freeport Village Board of Trustees in March of 2015 and also served on the Freeport School Board., She has received a Bachelor's Degree in Music from the College of William and Mary and earned a Master's Degree in Social Work from the Virginia Commonwealth University.

A passionate and dedicated volunteer, Debra has been active with the girl scouts and was a member of our Holy Redeemer Church where, in addition to directing the children's choir for 17 years, she served on the parish council and the liturgy committee, as well as on the soup kitchen team.

An active member of the Freeport PTA, Debra was elected to the Freeport Board of Education in 2006, a post she held until 2015, serving in various capacities including; board president, vice president, and trustee. She was active on numerous school working groups, including the code of conduct committee, and chaired the policy and community outreach committees.

Recognized for her selfless service to the community, Debra has received the New York State PTA Honorary Life Membership Award and Distinguished Service Award. In 2013, Debra was further recognized by Freeport Rotary Club's "Civic Leadership Award". In 2015, Debra was honored as a "Women of Distinction" by New York State Assemblyman Brian Curran. In May of 2017, she received the Community Leader Award from the Salvation Army.

A proud Freeport resident since 1990, Debra and her husband Steve, have raised two daughters Victoria and Elizabeth in the community they love. Debra looks forward to serving the communities in Nassau County's fifth legislative district which consists of Baldwin, Freeport, South Hempstead, and parts of Rockville Center, Merrick and Oceanside.