Nassau property owners will have until April 30th to file grievances with the county's Assessment Review Commission, under a 60-day deadline extension. The previous deadline was March 1 for the 2022-23 assessment roll released at the start of the year.

Due to the overwhelming response, this event is full.
We will look to schedule another session soon.

LEGISLATOR KEVAN ABRAHAMS IS CALLING FOR EMPLOYERS, BUSINESSES, INDUSTRIES, AND SCHOOL RECRUITERS TO SIGN UP FOR THIS YEAR’S ONLINE JOB & VETERANS FAIR: BRIDGE TO EMPLOYMENT OPPORTUNITIES.

This event will provide an online list of employers, available jobs, resources, & support services. This job fair will enable all seeking employment to connect directly with employers seeking employees to fill vacant positions. By clicking on the individual web links, job seekers can reach the company directly that they are interested in and inquire about the employment opportunities.

Let us help you find the perfect match.

Open to Everyone, Especially Our Veterans. 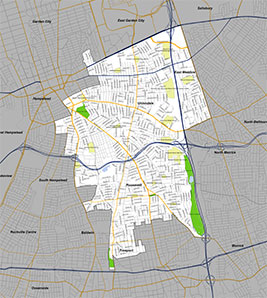 Since his election, Legislator Abrahams has made the needs of his communities his top priority, in particular highlighting problems regarding the stabilization of property taxes, addressing healthcare stabilization, funding for after-school programs, gangs and gang violence prevention. Abrahams has hosted several informational forums to give county officials and community leaders a first-hand look into the world of gangs and gang violence. He has also advocated for and supported additional funding to address this problem.
During each and every budget process during his tenure, Legislator Abrahams has led the way to reduce funding cuts to social service, youth, community health and senior programs. Abrahams was also the lead sponsor for the a local law that would restricted registered sex offenders from living near schools and parks or playgrounds. That law gave Nassau County one of the strictest sex offender laws on the books in the entire state.

“This law was to ensure that the county’s vulnerable children were not victimized by repeat sex offenders,” said Legislator Abrahams. “Up until now registered sex offenders could be released from jail and move right next to a school or park, even if their original crime was committed at a similar site.”

He was a leader in securing a $50 million environmental bond in 2005 and a $100 million environmental bond approved by the voters in 2006. These two bonds provide funds to preserve the few open spaces left in Nassau County, and will ensure that future generations have natural areas to explore.
Among his top priorities, Abrahams counts quality of life issues and child care issues. He was instrumental in the passage of Tobacco 19, a local law that raised the legal age to buy tobacco products from 18 to 19 in an effort to keep cigarettes off high school campuses.

The legislator, also in recent years, approved a “living wage” law that increased wages for workers contracted by the county to $9.50, starting in 2007. Increases followed in 2008 to $10.50 an hour and rose to $12.50 an hour in 2010. Supporters of the law included many labor groups representing home health care workers, and the Long Island Progressive Coalition. The bill was signed into law on Martin Luther King Jr. Day 2006.

Abrahams was also instrumental in the passing of a bill providing a partial tax exemption for qualified first-time home buyers in Nassau County. The bill will provide a break on property tax bills for the first five years.
The legislator also voiced his support for a bill aimed at warning consumers of the adult, and often violent, content of certain video games.

For the fourth straight year, the Legislature approved a “no tax increase” budget for Nassau county taxpayers, and added belt-tightening measures for county departments while funding programs that benefit the County’s neediest residents.

Just a month after taking office, Legislator Abrahams approved a bill for contractors wishing to do business with the county, in which the county is required to use its “best efforts” to use minority and women-owned businesses for at least 15 percent of the contracted amount.

“I believe that Nassau County must take the lead in encouraging minority and women-owned businesses to participate in the bidding process for County contracts,” said Abrahams. “It is my belief that every member of a community should feel included in the governmental contract process.”

A dynamic, compassionate and forward-thinking young lawmaker, Abrahams was named as one of Ebony Magazine’s (February 2004 Edition) “30 Leaders who are 30 and Under” as well as Long Island Business News’ “One of Long Island’s 40 Rising Stars Under The Age of 40 for 2010.”

Abrahams joined the County Legislature staff as Deputy Finance Director in 2000, eventually moving up to the position of Finance Director. He brings with him a wealth of government experience and has served as a legislative assistant and Deputy District Director for Congressman Floyd H. Flake and as a District Representative for Carolyn McCarthy. Abrahams also worked in the private sector as a Financial Analyst for Astoria Federal Savings Bank. Abrahams holds a Bachelor’s degree in Political Science from Queens College and also attended Baruch College’s MBA Program.