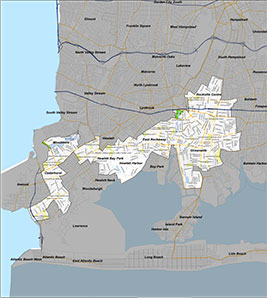 Howard J. Kopel is serving his seventh term as Legislator for the 7th District, which includes Oceanside, Rockville Centre, East Rockaway, Cedarhurst, Woodmere, and parts of Hewlett, Lawrence, Baldwin, Valley Stream and Lynbrook. His election in November 2009 signaled the need for change, and his reelections in  2011, 2013, 2015, 2017, 2019 and 2021 by substantial margins showed that his constituents believed his commitment to keeping Nassau County on the right track. Well respected by his colleagues, Howard J. Kopel serves as the Deputy Presiding Officer of the Nassau County Legislature.

Mr. Kopel intends to continue his work on fixing the County Executive’s flawed Property Assessment system and putting Nassau County's fiscal health in order. This past term, he spearheaded the Assessment Bill of Rights, meant to ensure safeguards so the people of Nassau County wouldn’t be taken advantage of by the Assessment Department. Previously, he had pushed for legislation that will reduce Nassau's structural deficit by close to $100 million. These measures will, over the next 3 years, eliminate the constant borrowing by the County for tax refunds, which is the historical source of most County debt.

Mr. Kopel will continue working towards a solution to the previously intractable sewage problems which threaten the health and finances of different areas within the 7th Legislative District. The Legislature has already approved the complete reconstruction of the Bay Park Sewage Plant, following its near destruction during Superstorm Sandy. Mr. Kopel also continues to work and advocate for those homes and businesses devastated by Sandy.

Mr. Kopel has been lauded for his professional relationship with lawmakers on both sides of the aisle. He will continue to work closely with both Republicans and Democrats for the benefit of residents.

Professionally, Legislator Kopel is a self-proclaimed "recovering attorney." Currently, he runs a national title insurance and settlement services business based in Valley Stream. A graduate of Brooklyn College, Howard Kopel earned his Bachelor's degree in Political Science before graduating from Brooklyn Law School. Today, Howard is admitted to practice law in New York State and the United States Southern District.

Howard Kopel has been married for over 47 years to his loving wife, Esther, and has four children and thirteen grandchildren. He is a congregant at several local synagogues, and a member of various local fraternal, service, and community organizations.