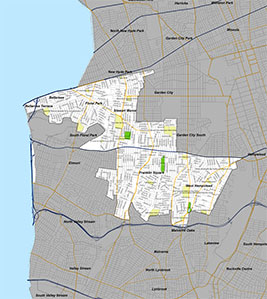 Vincent T. Muscarella, a Republican, was elected to the first session of the Nassau County Legislature on November 5, 1995. He represents the 8th Legislative District, which encompasses Franklin Square, Floral Park, Bellerose, Bellerose Terrace, West Hempstead and portions of Elmont, New Hyde Park and Stewart Manor. Legislator Muscarella was re-elected by wide margins in 1997, 1999, 2001, 2003, 2005, 2007, 2009, 2011, 2013, 2015, 2017 and 2019. Prior to his election to the Legislature he served for four years as State Assemblyman representing the 22nd Assembly District.

Mr. Muscarella was born in Nassau County in 1954 and is a lifelong resident of the county. After completing his undergraduate studies at Bowdoin College in Maine, he attended St. John's Law School and received his J.D. degree in 1979. Legislator Muscarella is a partner in the law firm of Muscarella and Tomasone and a member of the Nassau County, New York State, and Florida Bar Associations. He is admitted to practice in the Federal District Courts for the Eastern and Southern Districts. His legal career has included positions with the Hempstead Town Attorney's office and the Nassau County Attorney's office.

Legislator Muscarella and his family reside in West Hempstead